To summarise today’s overly-detailed ramblings: Bhéarra is not one of the Tuatha De Danann. She has a sister over the bay in Dingle, called Duibhne/Dovinia, for whom a tribe is named. An eighth-century myth about an ancestor of the Dingle people associates him with Bhéarra and her white cow that turns to stone. I share a bit of my UPG about these two goddesses.

5) Members of the family – genealogical connections

As with everything to do with an Chailleach Bhéarra, family is complicated. She’s very hard to classify as one of the Tuatha De Danann – doesn’t turn up on mythological lists/genealogies, and personally I’m not sure that the ‘Bua’ from Knowth who is married to Lugh can be assumed to be our Baoi of County Cork. Mythology represents her as an earth-shaper who is older than the hills. Could she be one of the Fomori? Possibly, but that has to be all conjecture. She’s certainly associated with the dark, dangerous forces of land, sea and sky that the Formori are. But however you categorise her mythologically, she’s certainly an ancient land-spirit. Stories of her being in the weather, in the wind in the trees, in the stones themselves, link her forever with the land and its wild moods. There’s not much evidence that the ancient Gaelic tribes were the nature-loving types that modern Paganism represents the ‘Celts’ as. They were afraid of the land – who wouldn’t be, when it could turn against you in an instant? – and placated it with offerings. I think Bhéarra is that kind of goddess – like Taranis, to whom human sacrifices may have been offered to placate the skies, or Sulis, to whom the people gave curse tablets asking the goddess of the deep waters of earth to destroy their enemies. Lots of these land deities have their dark sides.

6) Other related deities and entities associated with this deity

Speaking folklorically, family and related deities is a fascinating thing when it comes to Bhéarra. Across the bay in Corca Dhuibhne (the Dingle peninsula) in County Kerry, there’s a land mother goddess called Duibhne. (As with Baoi, her name can be spelled a number of ways – which makes her quite tricky to research.) The tribe of the area is called the ‘Corcu Duibne’, from various Ogham inscriptions there – ‘Corcu Duibne’ means the ‘seed’ or children of Duibhne (or Dovinia), their goddess.

And there’s a really wonderful, very telling written tale about a mythological ancestor of the Corcu Duibhne tribe, which links them to Bhéarra/Baoi and her white cow and island. There’s an 8th-century text – The Explusion of the Déssi to Munster – which tells the story of a man called Corc Duibne. He and his brother are conceived through incest. At their birth, the crops fail because of them, and the people prepare to sacrifice him and his brother to remove the curse. A druid takes Corc to an island, removing the curse from the area along with the boy. The island is Inis Boí (home of the Cailleach Bhéarra – the island that I’m always putting up pictures of). The wife of the druid is called Boí (a name of the Cailleach Bhéarra). In a ritual, she purifies Corc while he sits on a white cow. Eventually the curse moves from Corc to the cow, which jumps into the sea, turns to stone, and becomes the rock of Bó Boí.

My UPG is that my goddess has two faces, one belonging to a motherly ancestor of the tribe named Duibhne/Dovinia, and one belonging to the land-sovereignty queen named Baoi or Cailleach Bhéarra. I dreamt about Duibhne (along with Manannán mac Lir) on the night that I decided to explore the beliefs of my ancestors. I knew that the man in the dream was Manannán, for some reason, but I was clueless on the motherly, gentle woman who also appeared in the dream. It took me three years to work out who she was. It will only ever be unverifiable belief, but when I finally learnt of Duibhne and her associations with the Cailleach Bhéarra, I knew who I’d seen in my dream. 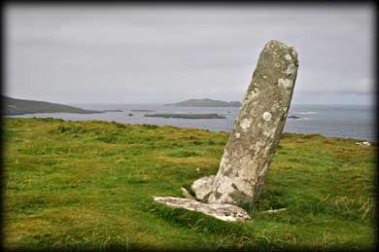 The Coumeenoole Ogham Stone, on the bay at Dunmore Head. The inscription reads “ERC MAQI MAQI-ERCIAS MU DOVINIA”. Erc is the name of the person being commemorated, and Dovinia is referenced. Photo by Megalithic Ireland.

Baoi. Boí. Buí. Sentainne Berri (an older title, from before she was known as ‘Cailleach’). Cailleach Bhéarra (which is a title not a name, but I often call her just Bhéarra. Saying her name(s) too often seems strange, maybe disrespectful).