Recently I’ve been thinking about what I make public and what I keep private. In the past I’ve scoffed, a bit, at the ‘keep silent’ answer of the Sphinx, that fourth bit of wisdom that Thelemics, Wiccans and others hold dear. I don’t hold with the late modern idea that religion should be kept out of the public sphere. Religion is culture. Religion is life. Many paganisms, and perhaps especially Gaelic polytheism, are woven into every aspect of life, both private and public. Singing prayers as you light fires in the morning; walking the bounds of your land to claim it as your own; Bealtaine fires to cleanse cattle and (today) ourselves.

But there are aspects of some paganisms that it may be better to keep silent about. I refuse to talk about magic, for example, except with people who are close to me (and then I’m careful). And sometimes, saying or doing anything puts you in the path of what the Irish called the Evil Eye – e.g. from people who don’t like it when others gain any kind of attention, and who might do things in response to that.

And then, some things need to be somewhat public. When you pray to St Expedite, it’s important that you share his name and spread his fame. People used to put his name in the paper. I pondered what the modern equivalent of that was, and came up with twitter and blogs – so here’s my acknowledgement of the generosity of St Expeditus (I hear that you never say his name the same way twice). He also likes flowers and pound cake – I had to substitute what we call Madeira Cake, as we don’t have that – but he seemed OK with the exchange. He came through for me. Blessings on you, St Expedite, who gets things done in a hurry. 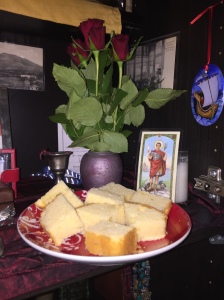 I’ve been doing some Work that’s definitely for my eyes only, recently. And pondering the paradox of how to write about that in places where it’s helpful to talk about what I’m doing, but where I know it will be seen, probably by those who don’t need to know what I’m doing… See, this is tricky :P I also got into some trouble not too long ago with some people who didn’t have the best of intentions, who (among other things) linked my public, academic profile with my personal, Pagan one. Their intention was to do me harm across all the spheres of my life. I don’t hide who I am – at the moment, it’s not difficult to get from here to my public persona. I’ve had to ponder how to address that. Password protected posts? Writing more in places where posts can be locked to a small audience? Neither of those sits very well with me, given the purposes of this blog.

No, I think the answer may be more related to the concept of ‘hiding in plain sight’. Which is again one that some Wiccans love, and that I’ve scoffed at a bit. But when I had important people over to the house recently, and had to look at what I was hiding in plain sight – Brighid’s cross above the door, altars that look like trinkets and pictures, my door sign a clear boundary between my place of Work and the rest of the house, and so on – it occurred to me that this, too, is Gaelic polytheist practice. The ordinary fire blessed in the quiet of dawn. The rowan cross that looks like decoration. The bit of butter left behind the house for the Good Folk. The whispered prayer as you craft an amulet that looks like a piece of thread.

It’s all important – especially for those who live in the liminal places. 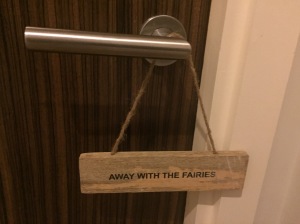