Inspired by Kiya’s post on a reflection she gave at her UU church today, here’s what I did at my Unitarian church today…

The theme at New Unity this month has been ‘culture’. Instead of delivering a reflection on the subject, this week the minister asked if the congregation would be willing to share things from their own cultures and those that have influenced them. And how we shared: stories, poetry, reflections, songs. From poems that gazed into the death-stare of Kali, through traditional Irish folk songs, via reflections by Egyptian feminists, past freestyling on Greek-British culture, and onto a gorgeous rendition of ‘Somewhere Over the Rainbow’, culture was brought home as something many-varied, colourful, and deeply embedded in us. Afterwards, friends and I fell into talking about queer culture over coffee. So many cultures. So much richness of belonging.

This is what I read in the service. If anyone hasn’t overheard me and Shai talking about the ‘goats’, you will at some point. Three months after I met Shai, I became suddenly, surprisingly and distressingly ill. Sometime around then, Shai told me this story, a Jewish Eastern European one. It has been constantly referred to in our home ever since. This is my interpretation of the story.

A man lived in a small, very crowded house with his wife, his in-laws, six children and a dog.

One day he couldn’t take it anymore. The noise, mess and stress were too much for him. In desperation, he went to see his Rabbi, who was known to be a very wise man.
“Rabbi,” the man said, “You have GOT to help me. There are so many of us in our little house. I can’t cope with the crowdedness and the noise and the mess and the stress anymore. What do I do about this situation?”

The wise Rabbi pondered this for a moment. Then he said to the man, “Do you have a goat?” 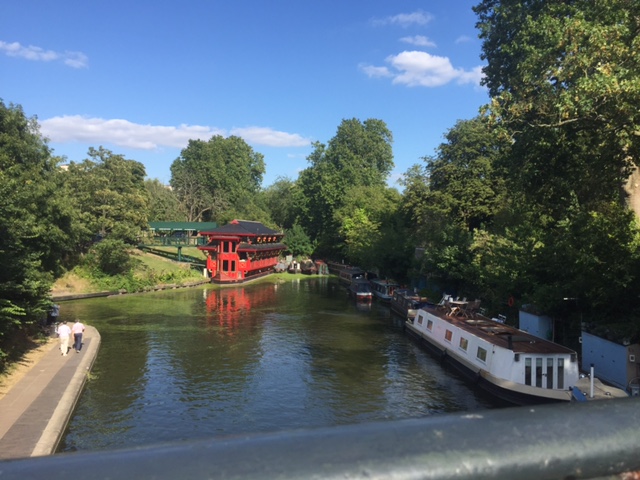 Regents Canal, where it meets the bridge at Regents Park, Camden, London

It’s the month of Ramadan. At the truly wonderful New Unity church (of which I am a new and enthusiastic member!), we’re learning from this with a ’30 days of a practice’ time. The service on Sunday was led by a Muslim member of the church, who talked about his experiences with Ramadan, how for him as a child, the fast was important but the feasting and family and celebration of life was more important. He, and other speakers, talked about the effect of practice on our faith and values. If you want to be more just, act justly. If you want to be more loving, act loving. “Act great,” as the Sufi Hafiz says, and you will be great.

We wrote intentions for practice on cards, shared them with the community, pinned them to a board and dedicated the next month to them. (So very Pagan!) I have dedicated these 30 days to my goddess – who, if you’re new to my blog, is Bui, the Hag of Beara (often syncretised with ‘the Cailleach’ archetype, although I know her as an individual tied to her land, a summer and harvest deity, a goddess of justice and chaos, Lady of the Mountain, of the liminal places and people). The specifics of what I’m doing for the 30 days isn’t the point – though, if you’re interested, I’m listening to fewer podcasts and doing more meditation and devotionals. It’s been three days so far, and my life is getting intense. But in a good (if very challenging) way.

I spend too much time talking, and not enough time doing. I have big ideas, but don’t do the little things needed to bring them into reality. I want to contribute to the wheel of justice that turns through the ages, to the great tree of Xartus with its flow from chaos towards creation – but I don’t actually do enough. Practice makes progress. Only doing makes change.

She is the owl in the night, unseen and ready to strike. Start from darkness and nothingness, she says. Strip back everything that is unnecessary. Out of dark chaos comes bright creation. Today I take down all my altars and start again from a single candle and the deep silence of beginnings. Then I start doing that in my life. What is my harvest?

One day the Sikhs asked the Guru whether those who read the Gurus’ hymns without understanding them derived any spiritual advantage from it. The Guru gave no reply at the time, and next morning went hunting. En route, the Guru came across a broken pot which had held butter. The rays of the sun were melting the butter on the broken pot fragments. The Guru took one of these fragments in his hand and said, “Look my Sikhs, broken pot shards – when they are heated, the butter that adhered to them readily melts. As the grease adheres to the potshards, so to do the Gurus’ hymns to the hearts of his Sikhs. At the hour of death the Gurus’ instruction shall assuredly bear fruit. Whether understood or not, it has within it the seed of salvation. Perfume still clings to a broken vase.” The meaning of the parable is that whoseoever daily reads the Gurus shabads shall assuredly obtain peace. And even though he may not fully understand them, God will undoubtedly assist him.

– Guru Har Rai and the pot; from SikhiWiki. From the Sikh tradition.

He has shown you, O mortal, what is good. And what does the LORD require of you? To act justly and to love mercy and to walk humbly with your God.